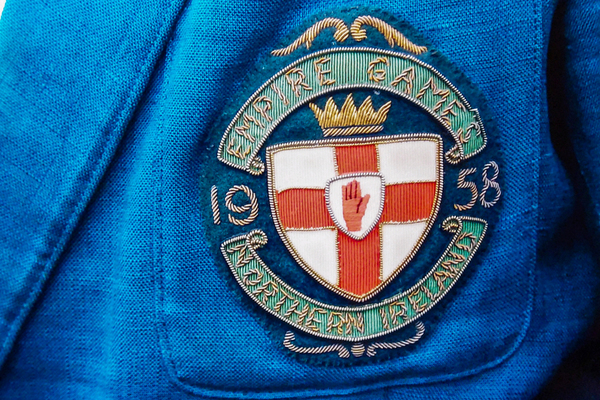 Robert Swann and the Empire Games 1958: A memoir by Dr Ivan Nelson

Robert Swann—known also as Bob Swann—was my best friend when we were growing up in Holywood Co Down in the 1940s and 50s. We lived fairly near one another were in the same Scout troop, and went to Sullivan Upper School, although we were not in the same form as I was a year older. Robert always wanted to be a civil engineer, and to this end his father wanted him to get a State Exhibition (a state scholarship) so he sent him to Armagh Royal School as a boarder for his final year at school. We kept up a lively correspondence during this year which I still have. This shows that Robert hated Armagh but he did get the State Exhibition and so went up to Queen’s University Belfast in 1955.

I was a Law student at Queen’s, in my second year at this time, and a keen member of the boat club. In my first year we had been the Irish Maiden (Novice) Champions, undefeated in the eight throughout the 1954–55 season. In the following year 1955–56 I was in the Junior eight and I persuaded Robert to join the club. In turn he became a member of the 1956 Maiden eight. This is the crew that made the famous tour of Irish regattas using a Rolls Royce lent to the club by Dr Harvey Jackson.

In 1956–57 Robert rowed in the Queen’s Junior eight, and in 1958 he was selected for the senior eight by the captain, Gordon Grey. This crew, coached by Dr Jimmy James, a university lecturer, was selected to represent Northern Ireland in the British Empire and Commonwealth Games to be held in Wales in 1958. I did not row that year but Robert and I maintained our friendship by letter and postcard, which I still have. The rowing competition was held on Lake Padarn in north Wales, and I received a letter from Robert on 20 July 1958, one which gives some flavour of an international competition. It was written after the first round of the eights competition, and before the repechages.

On Monday us, England and Scotland will row in a repechage and the looser will not row in the final on Tuesday.

Earlier in the week a Canadian had a birthday and the Canadian crew threw him in—you know what we do to people who throw people in, every mothers’ son, in they went and were very surprised! The Aussies who don’t get on so well with the Canadians laffed (sic) their legs off, they think the ‘Irishmen’ as they call us are a bit wild—life does have its lighter moments.

Sally was here
Our tracksuits are nice

Food A1 plus free beer

Cocktails with Duke of E on Tuesday night. After taxis laid on to take us anywhere but home. Will be going down to Cardiff on Wednesday and home Monday night

Here we will row to beat Scotland and on Tuesday balls out for the bronze medal—ie England.

We and the Aussies use the same bus for going up and down to the lake and sleep in the same quarters. We have had one or two outings together and several 250 and 500m rows. In the first five strokes we always go up three to five feet, in the next five they come up level again, by the 250 their cox or stroke is opposite me (5 seat) and at 500 metres they are a quarter to two thirds up. This invariably happens. It is said here and there that we should beat Scotland OK. In other 8s Australia took nearly 1 length off Scotland in 250 metres, then paddled home at 26 to Scotlands32–34.

Excuse scrawl and sticatto nature of this epistle but I am in bed and half asleep.

Love to Cyclone and I hope the girlfriend is going well!

I don’t know who Sally was at this distance but I have suspicions! Cyclone was my yacht, the girlfriend became the wife (eventually)!

This was a very good Queen’s Senior eight, and was probably the best eight in Ireland. It is a pity they did not contest the IARU championships. They may have lacked a bit of power in the bows but were well coached by Jimmy James. The crew comprised Derek Campbell (bow), Mike Armstrong, Norman Grey, Mike Thomas, Bob Swann, Hugh Nesbitt-Porter, Gordon Grey, Robin Davidson, (stroke) and Des Grey (cox).

However, they did not beat Scotland! Canada won the gold, Australia the silver, and England the bronze. Felix Badcock who years later coached Queen’s at Henley Royal Regatta was in the England crew.

The best Queen’s crew of the era was probably the 1956 Crew. They won the senior championship of Ireland in that year. The most successful year in terms of club victories was 1957, but the success of the Junior eight in 1958 in winning the Junior Championship of Ireland—the first time for Queen’s and it should not be forgotten.

There was a saying current in Belfast and Dublin in those days that ‘you never get a fair start south and west of Dublin’. Unfortunately, it had a germ of truth in it and Queen’s sometimes found that they were racing against more than ‘opposition’ on the water.